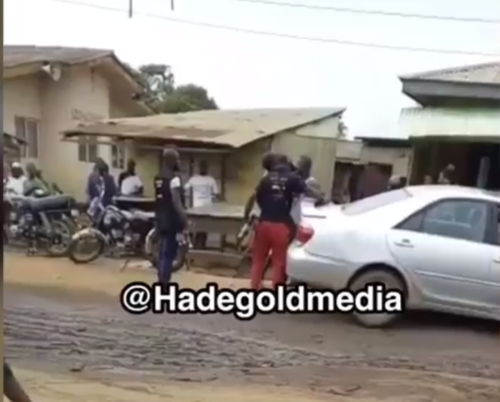 Yesterday, in Ikorodu area part of Lagos State, the Special Anti-Robbery Squad beats up a man due the reason of parking his car at the road side.

An eyewitness states that, the man parked at the road side to get something, the Sars officers, came down from their mini bus and asked the to move his car away from the road. He declined their request, these Sars officers, beat him up despite the fact that he’s showing a Lagos state office badge identified at the front side of his car.

Even though the #EndSars protest by the Nigerian youths was trending some days ago, the lawless Sars officers beat”s a man who claimed to be a Lagos State official in Laspotech, Ikorodu.

ALSO READ: Entertainment: You want to know E-Money Biography, Net Worth and his Investments